As we approach the end of the year, it is a fitting time to reflect on what we’ve accomplished with BTOP and the work that lies ahead. Today we’re issuing a report that provides an overview of BTOP grants, highlighting illustrative projects in each category – infrastructure, public computer centers, and sustainable broadband adoption initiatives – and discussing the benefits to various stakeholder groups, including schools, small businesses, people with disabilities, the unemployed, and seniors, to name a few.

Though we are proud of what we have achieved – quickly building a solid grant program from the ground up, performing thorough due diligence on an avalanche of applications, and awarding grants to more than 230 strong proposals – the projects we awarded are a testament to the hard work and ingenuity of grantees, many of whom worked with partners throughout their communities to create innovative solutions to their local broadband needs.

But now is when the rubber hits the road. As the report makes clear (and to continue the metaphor), a lot is riding on these investments – not simply improved broadband access and adoption but also greater economic opportunities and advancements in education, health care, and public safety. We are pleased that BTOP projects are making good progress; we’ve seen groundbreakings for infrastructure projects, new and upgraded public computer centers serving the public, and training programs underway. There is much more to be done, however. NTIA is now focused squarely on strong oversight and providing the necessary technical assistance to grantees. Given all that’s at stake, we are determined to see that these projects are completed on time, within budget, and deliver the promised benefits to the communities they serve.

The report’s findings are based on data collected through a survey of approximately 54,000 households and 129,000 citizens – the largest survey of its kind. Commissioned by NTIA and conducted by the U.S. Census Bureau, the survey provides compelling information on the state of broadband Internet use across America, including an unprecedented level of examination of Internet adoption by persons with disabilities.

In addition, the report makes a pioneering use of regression analysis, adjusting the findings for socio-economic factors in order to achieve a greater understanding of the digital divide.

Guest post by Matthew Guilford of the City of Chicago

A major component of this sustainable broadband adoption project is to engage youth, not only as the next generation of broadband subscribers, but also as drivers of broadband adoption for their families. The Digital Youth Summer Jobs (DYSJ), a program made possible by the SmartChicago project, is providing technology-oriented employment and training to 120 underserved youth as well as outreach activities to 120 parents or caregivers.

DYSJ is already having an impact on Chicago’s future innovators. This summer, 60 youth from the Smart Communities program were placed in technology-oriented jobs at over 30 work sites. I connected with Raven, a rising high school senior who worked this summer at Columbia College in Chicago, to understand how the DYSJ program has impacted her engagement with technology and her career goals. 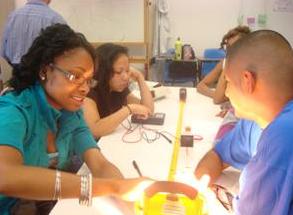 Now that all the broadband stimulus grants have been awarded I’d like to spend a few moments discussing what we’ve accomplished and what lies ahead. In less than 20 months, NTIA built a multi-billion dollar grant program from the ground up. This is the largest grant program that NTIA has ever managed and is one of the largest ever managed at the Department of Commerce. We had to hire staff, build the information systems, develop the rules, perform due diligence on the proposals, and award over $4 billion in grants, all before this past September 30. At every step of the way, we solved the challenges that arose, we answered the skeptics who said we would never get the money out, and ended up with what I think is a very solid set of sustainable projects that will not only expand broadband access and adoption but will also lead to economic growth and job creation. These projects will also continue to pay dividends far into the future in the form of improved education and health care, heightened innovation, and long-term local, national, and global economic growth.

Let me summarize our portfolio of projects. We funded four types of projects: infrastructure, public computer centers, sustainable broadband adoption projects, and state broadband data and development initiatives. These projects reach every state and territory and will:

The summit brought together community colleges, businesses, philanthropic organizations, federal and state policy leaders, and faculty and students to discuss how community colleges can help meet the job training and education needs of the American workforce.

The projects will provide high-speed connections that will enable students and faculty to use remote data sets, simulations, and other tools to learn and practice new skills as well as to collaborate with other classrooms in real-time. They will also improve education by bringing distance learning to schools in remote areas, enabling students to conduct online research, and helping teachers and parents to communicate with one another.

Earlier this year, at the start of Round Two, BTOP partnered with USDA’s Broadband Initiatives Program, to launch BroadbandMatch, an online tool that allowed potential broadband grant applicants to find partners for their projects, helping them to combine expertise and create stronger proposals. Conceived as part of the Obama Administration’s Open Government Initiative, the tool enabled applicants and would-be partners to see not only which small and minority-owned companies might supply goods or services for their projects, but also which nonprofit organizations, educational institutions and state and municipal governments were taking the initiative to improve broadband access and digital literacy.

Now, In response to positive feedback, and to promote continued broadband deployment and adoption, BroadbandMatch is here to stay. NTIA is re-launching the tool as an ongoing resource for communities pursuing broadband projects and programs. This tool can help BTOP grantees identify prospective vendors as they implement their projects, and it can aid businesses, non-profits, and state and local governments find potential partners to collaborate on broadband initiatives.

Though the grant application window was only open a few short weeks, over 1400 organizations established profiles on the BroadbandMatch site. This included hundreds of community anchor institutions like libraries and community colleges, hundreds more Internet service providers, dozens of small and minority-owned for-profit businesses, over a hundred states or municipalities, as well as various technology vendors, public safety institutions, venture capital firms and tribal entities.

“[A]s we continue strengthening the capacity of HBCUs, let us also recommit to preserving and enriching their long tradition of hope and success, and to continue sustaining our collective effort to meet and exceed America’s goals of educational excellence.”

When I stepped into the Health and Human Services Building at Coppin State University yesterday to share in the celebration of the grand opening of the Coppin Heights-Rosemont Family Computer Center, I was greeted by University President Dr. Reginald S. Avery. He was beaming with pride at being one of the few universities in the country to receive a BTOP award. He could name the others that had won, including Michigan State and Minnesota. He knew he was in select company. The foyer was bustling with community members, including kids from the local elementary-middle school and the Coppin Academy, an innovative high school located smack in the middle of the university campus.

As the celebration began, what became clear was the close bonds that had been forged between Coppin State University and the surrounding West Baltimore community. As part of the celebration, Dajuan, a ninth-grade Coppin Academy student talked to the audience about how he loved coming to the computer center. He was setting his sights on college, and the center made him excited about learning. After his remarks, Dr. Avery looked him in the eyes, shook his hand and patted him on the back. He did this to all of the students that crossed his path. Patricia Smith also spoke. She is semi-retired but was looking to get back into the workforce. She gave rave reviews to the “Employment and the Internet” training program and the helpful staff that are helping her retool.

Monday was a great day. Under the presidential gaze of nearby Mount Rushmore, I had the honor of participating in the groundbreaking for Project Connect South Dakota – a $25.7 million infrastructure project that will bring fiber optic broadband service to more than 300 community anchor institutions across the state. Based on the enthusiasm of the crowd of state officials, representatives from the partner companies, and journalists, I couldn’t help but feel gratified about how our efforts are coming together and are making a real change in peoples’ lives.

The ceremony (called a celebration by its organizers) was held at the Rapid City Regional Hospital and was keynoted by Governor Rounds, who applauded the Recovery Act award as “deliver[ing] the world” to South Dakotans. As we posed for the requisite shovel-wielding photo op, I joked that the brand new directional boring machine that would soon begin laying fiber beneath the parking lot would be more fun to operate than the shovels in our hands. (Hey, I got a few courtesy laughs.)

The project will be implemented by SDN Communications – a consortium of 17 separate local and regional South Dakota phone companies that will contribute $5 million in matching funds. All of the local companies had representatives who couldn’t have been more enthusiastic about the opportunity to extend broadband services throughout their cities and towns. After the groundbreaking, I conducted a site visit to learn more about how the project is operating and to meet people who are charged with making it a success. As part of my visit, a couple of SDN’s network engineers gave me a tour of the Rapid City fiber route and showed me many of the anchor institutions that will get connected.

On Tuesday I had the pleasure of visiting the first public computer center opened as a result of a $1.9 million BTOP grant to the City of Boston. The opening, at the Mildred Avenue Community Center in Mattapan, was attended by Mayor Menino, other city officials, and project partners the Boston Public Library, Boston Housing Authority, and Boston Centers for Youth and Families. Dare I say that it was “wicked” exciting?

At Mildred Avenue, I got to meet the center’s managers, computer teacher, volunteers, and – best of all – kids who couldn’t wait to use the computers to play educational games. The City of Boston project focuses on the “reinvestment” aspect of the Recovery Act by replacing and bolstering equipment at about 50 locations, including community centers, Boston Housing Authority sites, and libraries in many of the city’s lowest-income and lowest-broadband-adoption areas. These centers were hard-hit by funding cuts due to the economic climate, but now they will all be updated by early 2011. The BTOP investment will also support a range of training targeted to the needs of the community, including computer skills, job readiness, and GED preparation.

The project is a great testament to the power of collaboration and the determination of the city’s CIO Bill Oates and his energized team to bridge Boston’s digital divide and bring residents all the educational and job benefits that broadband has to offer.

Angela Simpson is a senior policy advisor to the Assistant Secretary. 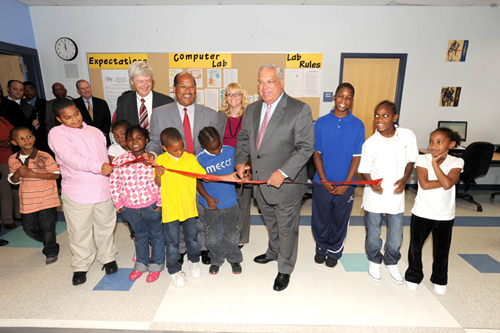